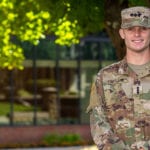 “Anything is possible, not through luck but through hard work,” said Lukas Hartlage.

Hartlage is no stranger to work ethic or tenacity as a near-4.0 student, an awarded ROTC cadet and a talented baseball player at the University of Pikeville.

On crisp fall mornings, Hartlage is up by 5:30 a.m. either with the baseball team lifting weights or in physical training with his fellow ROTC cadets. He enjoys the discipline of managing both ROTC and baseball, which he says “adds another layer to his education.”

“I have seen Luke work his way to be an all-conference catcher, leader and role model for our program,” said UPIKE Baseball Coach Jim Pitt. “His character and work ethic are second to none. He consistently has one of the highest GPAs on our team each semester. Luke represents our university and program in a first-class manner, and he’s everything you hope for in a student-athlete.”

As a senior, Hartlage was recently named a 2018-2019 Distinguished Military Graduate, but accolades like this have not been achieved without diligence and commitment. He was awarded the distinction after attending camp with fellow cadets from across the nation at Fort Knox, Ky.  At camp, cadets are scored on numerous categories such as map skills, basic first aid, fitness and leadership simulations.

“Leadership is the most profound skill that ROTC teaches,” said Hartlage. As the most senior cadet, he says he has not only learned leadership but also communication. Hartlage says many individuals do not realize the opportunities that ROTC provides.

“Essentially, you’re taking a class that pays for not only your education but also room and board,” he said. “You also gain a solid support system that constantly invests in you throughout your academic career. It’s given me a good foundation for life.”

After graduation, Hartlage will begin his career with the military in humble service in Air Defense.

“Lukas is an exceptional young man,” said Senior Military Science Instructor and Director of Military Initiatives at UPIKE Lt. Col. Todd McLean. “His focus and determination have allowed him to excel as a student, athlete and leader. As the senior cadet, he embraces his role, not only setting the example for others but also as a teacher and mentor to junior cadets. His potential is limitless.”