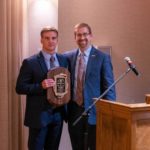 Brown received his medical degree from KYCOM in 2001 and was part of the first graduating class of the newly renamed medical school. He is a board certified vitreo-retinal surgeon and assistant professor at the University of Kentucky Ophthalmology and Visual Sciences. Brown currently practices and resides in his hometown of Pikeville.

Brown reflected on three primary blessings from his time in medical school. He recalled blessing one being accepted into medical school after initially being wait-listed. He had a great entrance interview with Strosnider which lit a fire in Brown that would carry him through. The second blessing was meeting classmate Andrew Brinkman, who became the one person Brown swears he would not have made it through medical school without. His third blessing was learning from Dr. Strosnider.

“Stro was a great man. He was, in every sense of the word, born to be a doctor,” said Brown. “He taught me how to be a real doctor. I may not remember everything I learned in medical school, but I remember every word Strosnider said about how to treat patients. He taught me about the human side of being a physician.”

With a vision that still holds true today, KYCOM carries the legacy of Strosnider as its guiding principle and continues to train osteopathic physicians to serve in the mountains of Appalachia and other rural areas. His impact on those who knew him lives on.

“I love Dr. John Strosnider. He was my mentor, my friend and my brother in Christ,” said Brown. “He is the man that continues to inspire me to be the best doctor and most importantly, the best man I can be.”