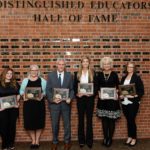 The University of Pikeville honored the 2021 Distinguished Educators Hall of Fame inductees at a ceremony held on October 26, in Booth Auditorium. All Healthy at UPIKE guidelines were followed for the in-person event.

Since 2010, UPIKE has carried on the yearly tradition of celebrating those educators whose contributions to learning have inspired generations of students, providing them with unwavering support in their life-long commitment to the field of education.

Laura Castle is a registered nurse with extensive experience in community health, and a career and technical educator for 16 years with a discipline in allied health. Castle established and currently teaches career pathways in both allied health and pre-nursing at Johnson Central High School. During her tenure over the program, it has evolved and grown to include two additional health science instructors and two biomedical instructors to improve and expand services for students passionate about a career in health professions. In addition to her commitment to training students for a thriving career in health professions, Castle is involved with HOSA Future Healthcare Providers, a student organization for allied health majors. The group participates in competitive state and international events, volunteers for community service projects and engages in community health education initiatives. Outside of the classroom, Castle serves her community as a blood drive organizer for Be the Match, promoting organ donation, participating in Ronald McDonald House fundraisers and helps raise awareness for tobacco/vaping prevention, mental health and skin cancer. Castle lives in Oil Springs with her husband Shawn Castle, and together they have three children Alex, Nick and Alaina.

Kimberly R. Clevinger received her bachelor of business administration (’99) and bachelor’s degree in elementary education (’07) from Pikeville College, her master’s in educational technology from Morehead State University (’11), her Rank I in supervisor instruction from Union College (’13), and her certificate in principalship and director of pupil personnel from Morehead State University (’20). With Pikeville Independent School District, Clevinger has served in many roles, including ESS teacher, fifth-grade math teacher, assistant principal and currently as instructional supervisor/director of federal programs. In addition to her responsibilities at school, Clevinger is a member of the Kentucky Association of School Administrators. She was also awarded the outstanding student award at Morehead State University’s COE honors reception for the Department of Foundational and Graduate Studies. Clevinger volunteers with after-school activities and events and is also involved in her community church activities. Clevinger is the daughter of Brenda Kinder and the late Michael Kinder. She and her husband, Joe Clevinger, live in Pikeville with their daughters Micah and Josie.

Selena Cochran received her bachelor’s degree in elementary education from Pikeville College (’05) and her master’s degree in educational leadership from Union College. Serving as an educator for 15 years, Cochran currently serves as the digital learning coach at Porter Elementary. Cochran has previously taught second and third grade, specials (STEM), assisted with response to intervention, served as the school’s curriculum coach and taught in small reading groups. In addition, Cochran is a school mentor, the building assessment coordinator, a member of the Lighthouse Team, Thrillshare Team, the site-based decision-making team and the resource review team. Outside of her commitments in the classroom, Cochran is a member of the East Point Church of Christ, where she serves as a church youth leader. She is also an active member of the Johnson Central High School Alumni Association. Cochran lives in Oil Springs with her husband of 15 years, Josh and their three children, Grant, Jules and Jett.

James Coleman graduated from Pikeville College in 1996. During his college education, Coleman volunteered as an assistant coach and tutor for the academic team at Johns Creek School and, upon graduation, was hired as a sixth-grade science teacher. Coleman has been teaching at Johns Creek for 25 years. For the first 16 years, he taught sixth-grade science and currently teaches pre-algebra and algebra one. In addition to his teaching responsibilities, Coleman is the building assessment coordinator, school technology coordinator and member of the site-based council. Coleman is a member of PCEA KEA and, as an academic coach, has been inducted to the hall of fame by the Kentucky Association for Academic Competition and Pike County Schools in addition to being a Kentucky Colonel. For Coleman, the hard work is worth it when you hear from a student years later that you made a difference in their life. Coleman lives in Pikeville with his wife, Renee.

Mark Gannon received his bachelor’s degree in Secondary Social Studies from Pikeville College (’95) and his master’s in Instructional Leadership from Morehead State University (’04). In addition to being a social studies teacher for 12 years, he served on the site-based council as Ninth Grade Academy Administrator, assistant principal and is currently in his ninth year as principal of Belfry High School. Gannon also served as coach and assistant coach for the girls’ basketball team for 13 years. During his coaching tenure, Gannon was named Coach of the Year – Girls’ Basketball by both the News Express and the Williamson Daily News. In addition to other community service endeavors, Gannon has been involved in educational innovation on the regional and local levels. He serves as a member of the National Association of Social Studies Teachers, National Association of Secondary School Principals, the Association of Supervision and Curriculum Development and was the regional representative for the Kentucky Association of School Administrators. He is also a member of the Pike County Certified Evaluation Committee and was on the Appalachian Regional Hospital Community Advisory Board. In addition to serving on numerous professional committees, Gannon has received the William S. Justice Excellence in Teaching Award at Belfry High School and is recognized as a National Who’s Who Among America’s Teachers. Gannon lives in Belfry with his wife of 34 years, Teresa (Fletcher) and his children Matthew and Abigail.

Shauna Lynn Patton received her associate degree from Prestonsburg Community College (’86), her bachelor’s degree in elementary education from the University of Kentucky (’88), her master’s degree in language arts elementary education (’94) and her Rank I in K-12 supervisor of instruction (’94) from Morehead State University. After graduation, Patton embarked on a 33-year long career with the Johnson County School System. During her tenure, Patton has served as a primary teacher, district science resource teacher, K-12 supervisor of instruction and personnel director. In addition to her involvement with the Johnson County School System, Patton volunteered extensively in her community with the Paintsville Kiwanis Club, Johnson County Solid Waste Committee, Johnson County Census Committee, Hands and Feet Ministry and is a Sunday school teacher and member of Paintsville First Baptist Church. During her career, Patton was honored as Ashland Oil’s Teacher of the Year in 1992 and Kentucky District Assessment Coordinator of the Year in 2011. In addition, Patton was the district liaison of Family Resource and Youth Service Centers for the Kentucky Association for School Administrators, the district assessment coordinator chairperson for Kentucky Educational Development Corporation DAC Cadre and a DAC Advisory Council member for the Kentucky Department of Education. Patton also held leadership roles such as Johnson County’s district assessment coordinator, federal programs coordinator, homeless coordinator, K-12 instructional resources coordinator, Family Resource Youth Service Center contact, personnel director and central office liaison for several Johnson County Schools, to name a few. Patton lives in Stambaugh with her husband Jim Patton and son Jacob Davis Patton.

Paula Baldridge Smith graduated from Millard High School in 1978 and received her bachelor’s degree from the University of Kentucky (’86), her master’s (’92) and her Rank I (’94) from Morehead State University. Smith’s 33-year career in visual arts began with teaching part-time at Beaumont Junior High School in Lexington, Ky., but she was soon offered a full-time teaching position at Jessie Clark Junior High School. Smith then accepted a teaching position in Floyd County teaching art at Allen Elementary School and Martin Elementary School. Smith then took a teaching position at Pikeville High School, where she taught until her retirement in 2015. During the same time, she taught simultaneously at the University of Pikeville. Even after her retirement from teaching, Smith’s passion for art and Appalachia has never been stronger. In 2006 she established Quail Ridge Studio. In addition to her work in the classroom, Smith has been part of Teens Who Care, a member of the Hellier Baptist Church and Freeda Harris Baptist Church, the PHS Site Base Council, previous chair of the site base council, sponsor for the Pikeville High School Theatre Club, museum trips and plays and served on the prom committee. Smith has also been active in her community with organizations like the Arts House, Appalachian Center for the Arts, Quail Ridge Association and Teens Who Care. Smith is a University of Kentucky Blue Ribbon Award recipient, designed an official state seal to honor the 100th year of miner’s compensation, and her coal prints have been seen throughout the U.S. and Ireland. Her artwork was also presented in the Williamson Daily News. Smith is the daughter of Stewart and Patricia Baldridge, sister to brothers Jack and Jody Baldridge, mother to Terra Pack (Brandon Pack) and grandmother to Mia and Branson. Smith and her husband Terry Lee Smith live in Pikeville.

For more information about the Distinguished Educators Hall of Fame at UPIKE, nominations or previous inductees, please visit upike.edu.